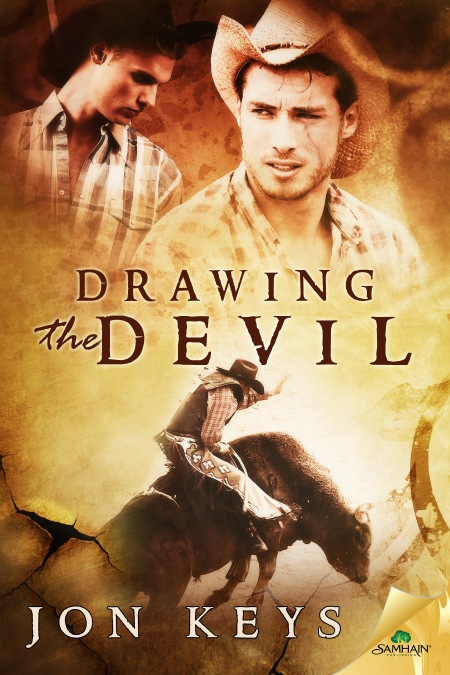 Talk about a tease…it’s been six long months. But today it’s over and Drawing the Devil is available. What’s really great to me, it’s also available in print! This is the first of my books to be out in paperback. But however you’d like a copy for your reading pleasure, it’s available today.

Haven’t see the promos for the novel? I’d be happy to share.

A heart can live a lifetime in eight seconds.

Ever since his father caught him with another boy and threw him out at the tender age of sixteen, Dustin Lewis has been fighting his way up the national bull-riding rankings. He’s on the brink of qualifying for the National Finals when he draws Diablo, a notoriously rank bull—and the ride goes bad.

When bullfighter Shane Rees frees Dustin from the rigging of the same bull that nearly destroyed his face, he comes dangerously close to dropping his guard. Shane knows the potential consequences of being gay in a sport loaded with testosterone-overdosed cowboys, and the resulting scars of mind and body have left him with little self-worth.

Their near-death-by-bull first meeting sparks an attraction that awakens every last one of their personal demons. Yet as the National Finals draws closer, so do they. But they’ll have to overcome emotional highs, near-tragic lows, and bone-crushing danger before love can bust out of the chute.

Nothing made Dustin feel more alive than sitting on a ton of beef and balls that ate cowboys for lunch. The rush was almost as good as sex. Almost. He was going to get a hell of a buzz from the bull he drew today.

“Get him in there, boys!” yelled Dustin.

His pulse raced as the bull slammed into the gate, never slowing from his headlong race down the alleyway. It tried to climb over the chute, hooves banging against the enclosure. Dustin waited for a still moment and then dropped onto the brindle hide below him. The metal chute was tight against Dustin as his legs wrapped around the bull with no room to spare. His body flooded with adrenaline. He yanked the rope around his rosin-coated glove as Diablo fought with the metal chute, then drew his crotch snug against his hand. He rammed his cowboy hat down tight. There was a second when everything aligned. Dustin gave the gateman a quick flip of his head, the signal for all hell to be let loose.

The side of the chute flew open with the force of two thousand pounds of muscle ramming against it, ending with the crash of metal against metal. The bull jumped sideways to clear the gate, then dropped into a spin.

With a snap of his hindquarters, the bull sprinted a few yards, then contracted like the devil’s slinky. It uncoiled violently, slashing the air with all four hooves in a gravity-defying move. As he anticipated each twist of the bull, Dustin tightened his jaw in determination. The bull finished his move by slamming against the ground, jarring Dustin to the bone.

Fuck! I see why this bastard’s named Diablo.

Diablo dropped into another spin. His body swapped ends with each thump of Dustin’s heart. As the bull hit his stride, Dustin struggled to regain control. No! You aren’t tossing me. Seeming to sense Dustin’s effort, the bull flipped back on itself and reversed the spin. The forces pummeled Dustin even as his muscular legs fought to regain their grip. Forces outside his control overwhelmed him. His battle against animal and time ended as he fell into the hellish vortex the bull created.

Shane’s gut twisted when the gate exploded outward and a familiar tiger-striped bull jumped into the arena. It had to be this motherfucker? His thoughts flashed to the thick scar bisecting his face. A souvenir from the last time he’d dealt with this bull. The crash of metal against metal signaled the start of Shane’s job. He focused his entire being on the cowboy who might need his help.

Shane tracked everyone as he positioned himself: rider, bullfighters and bull. There was a reason this bull won the vote for rankest bull at most of the rodeos he was at. Diablo liked to hurt cowboys and bullfighters. Shane gathered up the tattered legs of his costume as he read the beast’s moves and adjusted his position constantly so he could rush in if needed.

He studied the rider and how he handled the bull through the first jumps. Shane could imagine the painful jar reverberating through the cowboy each time the bull moved from one maneuver to another. Then it happened—the break in rhythm marking the loss of control from the rider. Damn it. Shane ran toward the bull. This bull rider needed help getting out of the arena in one piece. When he lost his seat and fell inside Diablo’s spin, Shane shifted to a frantic sprint.

He ran across the bull’s path, waved his hands and hoped the loose flags of clothing flapping in front of him would distract the bull from the cowboy under his hooves. A split second later, the situation became worse. The guy was hung in his bull rope. The slender rider bounced against the enraged animal like a rat in a terrier’s mouth.

Shane ran across the path of the rampant bull, hoping he would give the other bullfighter enough time to get to there. “Come on, you worthless piece of hamburger meat. Chase me!”

The bull spun toward Shane, responding to the rag streamers that flapped from his arms. Diablo pawed the arena floor, tossed dirt high in the air and charged Shane. As he cut in to avoid the bull, the other bullfighter yanked on the kid’s arm. He popped loose from the rigging, and they landed on the arena floor in a heap. Shane dodged the end of Diablo’s blunt horn by a hair as he danced away, leading the bull from the pair, who struggled to get across the expanse of arena.

Shane raced for the barrelman, who dropped inside at his approach. As his painted face disappeared, Shane spun the barrel and positioned it between himself and the bull. Not a heartbeat later, the bull charged and a dull thud sounded as a cockeyed horn struck the barrel’s aluminum wall. Diablo paused, then tossed a spire of dust before charging Shane again.

Shit! Get that cowboy out of here!

Shane gauged the progress of the other two as he worked to keep the barrel between himself and the angry animal. After a brief test of wills, the bull left Shane and ran along the wall in search of an easier victim. Shane used the time to catch his breath. The bull circled back, and Shane’s heart jumped into his throat when Diablo’s head snapped up, his nostrils flared, and he spun toward the fleeing pair.

The bull thundered toward them as they ran for the fence. Shane realized only a slim chance of intercepting the ton of beef existed. He ran at Diablo, who whirled toward him again. The two ran a collision course, with Shane certain to be the loser. A gasp erupted from the crowd when, at the last second, Shane jumped toward the bull.

Diablo slammed to a stop. Shane sailed over his head and planted a foot on his thick neck. His momentum carried him forward to complete the jump. The crowd erupted into thunderous applause as he landed on the packed arena floor. He spun in time to see the cowboy pulled over the fence. The other bullfighter ran back into the arena as the bull shot out the gate.

Shane walked to the barrelman and slapped him on the back. “Did you get a nice nap in there? Ready for another bull?”

The crowd erupted into thunderous applause. Shane threw up his arms in a triumphant gesture…and curtseyed.

Shane sat in a dark corner of the bar, the intermittent flashes of flickering neon the only illumination. There was a tap on his shoulder, and he turned to see the handsome kid who’d tried to ride Diablo.

“Hey, man. I’m Dustin. You saved my ass today. Your drinks are on me. They said you jumped the damn bull to give them time to drag me out.”

Shane lifted his longneck and filled his mouth with the cool amber liquid, then let it slide down his dry throat as their eyes met. “Name’s Shane. Glad I could help. Your ride was a little crazier than usual, but with the amount of beer I plan to drink tonight, it’ll cost you.” Shane leaned back into the shadows, trying to further hide his scarred face.

A dimple appeared in Dustin’s cheeks when he grinned. “I ended up winning today, so I can cover it.”

“You won? I thought you fell before the buzzer?”

Dustin lifted his bottle of beer and chugged down its contents, his prominent Adam’s apple dancing as he swallowed. He emptied the longneck and lowered it with a sigh. “Everyone had shitty rides today, but my other go-rounds kicked ass, so I ended up high score.”

Shane bristled and started to stand to defend himself, but realized the crack was directed at Dustin.

The interloper tipped his hat backward with a friendly wink. “Yeah, pussy. We’ll see who has the biggest dick. Just wait.”

“Hey, asshole, meet Shane. He’s the bullfighter who saved my butt today. We were just talkin’ about how much beer he’d have to drink before we’re even.” Dustin turned to Shane. “Todd puts out for me whenever I whistle.”

“Yeah, whatever. Dustin loves my dork up his honey hole.”

“Yeah, whatever. I need to find some hot tail to slip my nine inches into.”

“Go for it. Maybe there’s some drunk chick here who’ll think your four inches is nine.”

Todd flipped Dustin off as he walked to a huddle of girls whose drinks all had little umbrellas.

Dustin twisted back to Shane. “Sorry about Todd. He’s an ass, but he’s my best friend.” Dustin signaled the bartender and drank from the ice-cold bottle he brought, his second. “Also my closest competition.”

“Yeah, I saw you were really high in the earnings. Taking a run at Finals?”

Dustin nodded and set down his beer. “Yup, I’ve got a good shot at making the short list. If I don’t get too many more repeats of today.”

Shane’s hand drifted to the deep scar. “Yeah, he’s a bad son of a bitch.”

One thought on “Drawing the Devil is RELEASED!”