“Your grandfathers aren’t doing very well. A kid of one of their friend’s totaled his pickup, and they don’t expect him to make it.”

Danny leaned up from the backseat. “Is this the people they went to college with?”

Trent replied without glancing back at the twins. “Gordy has a Ph.D., like Darrin. But he works for some organic agriculture thing around Denver. They’ve kept in touch since college. Gordy is a genius according to Darrin.”

Danny considered what Trent said briefly before plunging in with more questions. “He must be hurt bad. What happened? What’s wrong?”

“They didn’t ask,” Trent said. “All we know is it was an automobile accident.” END_OF_DOCUMENT_TOKEN_TO_BE_REPLACED 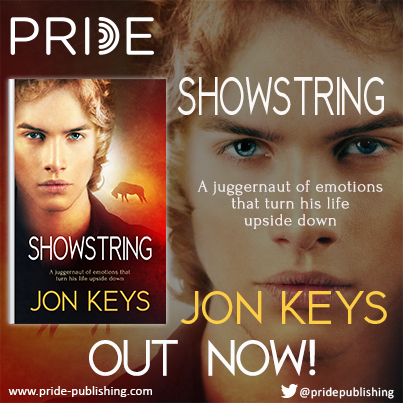 Showstring has been released at all your favorite eBook venues.

Mitch dug out one of the huge glass tumblers he and Darrin had collected from somewhere through their life together. But he wanted a glass that was going to take a lot of time to empty. He also didn’t want one of the flimsy plastic pieces of shit either. Mitch wanted a nice thick, hefty glass made out of—well glass damnit. So if I decide to have an ugly fit and throw the glass into the stone fireplace, it would break into a thousand satisfying fragments.

Not that he would ever do that. Mitch had pulled that stunt once during their marriage, and the relationship had barely survived. Mitch had never seen Darrin so pissed off before, then, or after. Mild mannered, polite Darrin had gone bat shit crazy on Mitch’s ass.

But Mitch had learned his lesson and kept away from the drama of breaking a glass and heated arguments. He filled the glass with ice, brought out the pitcher of sweet tea, and filled his glass. By the time he’d put the tea back into the fridge, condensation had coated the glasses exterior. The ran the chilled glass over his forehead as a sigh escaped his lips. Then he lifted the glass and took several gulps, enjoying the cold sweet liquid rolling down his throat.

The amber liquid washed the taste of dirt and alfalfa from his throat and as he cooled he walked to his recliner and sank into its soft cushions. He looked through the window to the sun-bleached landscape. Heat rippled across the blacktop, and he knew without testing it that it was soft under his foot.

“What are you doing sitting in the dark? I know it’s hot as hell outside, but it’s pretty good in here.”

Mitch took a deliberate drink from his glass before saying anything. “I called Gordy today. No real reason. Just haven’t talked to him in a while. They were at the Intensive Care unit at the hospital. One of their kids was in a wreck.“

Darrin grabbed the chair between them and had the appearance of someone who’d been kicked fully in the chest by a mule. He made it to the recliner and collapsed against the leather cushions. Time had lost relevance by the time Darrin could speak. “Which kid? How serious is it?”

“Dennis. Sounds like he swerved to miss a herd of elk crossing the road. He managed to miss the elk, but he wrapped his pickup around a tree. They had to life flight him to a hospital in Denver. It didn’t look good.”

Darrin took a deep breath and held it before letting it ease from between his lips. “That sounds bad.”

Mitch took another drink and tried not to think as the icy liquid slide down this dry throat. Every thought was of the pain he heard coming from Gordy with every word that slipped past his grief-swollen throat. The anguish ripped his heart into pieces. He took another long drink before refocusing on Darrin.

The pain framed in Darrin’s face was as bad as he felt. Mitch wasn’t able to deal with more than the pain already washing through his body. Darrin wiped at the tears flowing down his cheeks. Both of them sat quietly, dealing with their emotions. Then Mitch slammed his glass onto the table beside him. He’d reached the bedroom before he heard Darrin’s voice as he struggled to catch up.

“What’re you doing? There’s nothing for us to do but pray.”

“Prayer hell. I’m going to Denver and help our friends.”

Mitch yanked out a travel bag and started pulling out clothes. Darrin walked over and wrapped his fingers around Mitch’s wrists. “Mitch, they’re preparing to say goodbye to their son. What would you do to help?”

“I don’t know, but somehow I could make it easier.”

He turned to Darrin, the dam holding back his grief burst, his calm facade crumbled, and Mitch’s pain surfaced. Darrin held him as they cried in each other’s arms.

The links listed below go directly to the individual stories.